DID YOU GET CAUGHT UP IN THE MAY DAY PROTESTS? 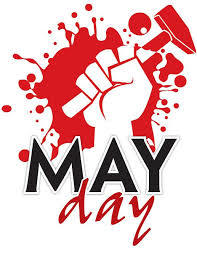 Once again, the Northwest reels in the aftermath of May Day, with a peaceful day of protest erupting in chaos and violence.

What is May Day?

May Day (May 1st) was originally an ancient pagan holiday, a celebration of Spring and the transition to Summer in the Northern Hemisphere. Different cultural groups have designed May Day celebrations or rituals in line with their cultures or beliefs (e.g. maypole dancing, daisy crowns).

May 1st is also a labor holiday in many regions worldwide. It was declared “International Workers Day” in 1886 by the International Socialist Conference after violent protests in Haymarket Square in Chicago, during a time when laborers were fighting for fair working conditions internationally. The U.S. celebrates Labor Day in September, but May 1st is a workers' holiday globally. It is a day that many people around the world, including in the U.S., protest and riot in the name of labor movements and better working conditions.

What happened in Seattle?

Seattle has been known for eruptive and disorderly May Days in recent years. Seattle's May Day saw less turmoil this year than past years, but there were still arrests and conflict.

Komo and other news sources report at least 5 arrests after May Day protesters and pro-Trump demonstrators faced off at Westlake Park in downtown Seattle. Officers intervened and ordered crowds to disperse in their efforts to control the ensuing fights. Arrests that have been made public include obstruction charges, attempted assault, unlawful possession, misdemeanor theft.

Nearby Olympia, WA and Portland, OR saw heightened chaos and violence with broken storefront windows, street fires set, and police attacked. There were dozens of arrests in Portland and rowdy protests in Olympia saw quite a few arrests as well.

If you or someone you care about was charged with a crime during May Day or in the aftermath, please consult a criminal defense attorney as soon as possible. Whether you are charged with a property crime, trespassing, assault, or obstruction, it is essential that you have skilled legal counsel to advocate for the best possible outcome in your case. Please contact us today for a Free Consultation.

I DON’T THINK I AM GETTING ENOUGH CHILD SUPPORT – WHAT CAN I DO?

WHERE ARE SEATTLE’S TRAFFIC-STOP HOT SPOTS?